My literary blogging (and to some extent, the background reading also) has been somewhat sporadic of late, leading to a sad lack of posts in November and December. I am however, fighting shy of embarking upon any New Year resolutions to rectify this matter. The words ‘reading’, ‘blogging’ and ‘resolution’ just don’t seem to me to go together, making something that should be pleasurable into a mundane chore. Rather, I am hoping to put together a plan, a timetable, a routine (anything but make a resolution) to keep both the Landing Book Shelves and my reading challenge alive and kicking throughout 2016 and even beyond. Therefore, The Landing will remain a resolution free zone as I try to buck my ideas up (as my mum often told us to do we were kids) and get this blog firmly back on the literary road.

As part of this bucking my ideas up thingy, I thought that I would cast an eye over the blog as it approaches its fourth birthday on 2 February. As a starting point, I re-read my Prologue and the first blog post where I explained my aims for The Landing. I was supposed to be reading around the unread contents of the book shelves on the landing at home, rather than adding any more new books to the dreaded  To Be Read Pile. Over the years however, one or two wee get out clauses have crept into my challenge (in cases of literary deprivation) that I have taken advantage of many a time. My main get out clause is the library, since I have set no limit on my borrowings. In practice, I do usually only pick up one or two books at a time. I may have mentioned before on The Landing, my particular library method, which is to scan the New Titles and Just Returned sections and take potluck with what I find. Serendipity is a splendid thing…

I have also included the occasional review copy and books that I received as gifts. This has been stretched to books bought with gift vouchers (including, but not necessarily only book tokens). As you can see, I have  managed to get my hands on some fresh literary blood without too much effort. I know that reading new stuff was not really the point of the exercise, but at least I’m not going out and buying more books willy-nilly. That is unless you count my forays into second hand bookshops (particularly where I have discovered a new shop such as in Blessington) and the annual Trinity Book Fair, where I have spotted books simply begging to be purchased and loved. So that’s alright then, isn’t it?

Well perhaps not, but I think I’m stuck with my bookish urges, so I will just have to make the best of the situation and keep reading around the landing TBR pile, regardless. I believe that I did once ponder about the situation where at the same time as reading the existing landing books stock, I am relentlessly adding to it. The only thing I can say in my defence is that the rate of acquisition has slowed down enormously over the last few years, as I attempt to explore the wealth of books already here.

I will just close by mentioning that I had three books for Christmas (see photographic evidence), which naturally I will be forced to read…(watch this space). 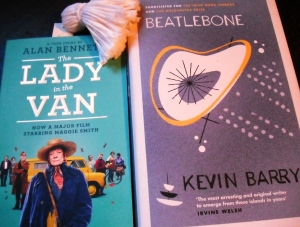 ‘A Happy Reading New Year’ to one and all! 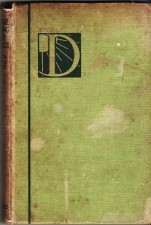