Browsing through the ‘One City One Book’ poetry book, If Ever You Go brought to my mind last year’s birthday present from my daughter. She chose to buy me the new edition of Poems on the Underground, which I have been picking up to read every so often. For this edition, the editors have decided to collect poems into themed sections including The Darker Side, The Artist as ‘Maker’, Exile and Loss and The Wider World. All of the poems in the anthology have been featured on the London Underground poetry posters at some point since the project began in 1986. My smart new edition was published to coincide with the 150th anniversary of the famous underground.

It seemed appropriate to follow on from April’s Dublin theme, with a poem from the section on London. I have chosen one from that ever-prolific poet Anonymous, as a nod towards my last #PoetryinJune blog post in 2013 when he/she insisted on sneaking in to close the series. Another reason for choosing this lighthearted London poem is that many of you probably remember it from childhood (or at least a version of it).  According to a Wikipedia article the following version first appeared in Tommy Thumb’s Pretty Song Book, c 1774 (but with ‘ye’ rather than ‘the’). An excellent source of information about nursery rhymes is Iona and Peter Opie’s The Oxford Dictionary of Nursery Rhymes (Oxford University Press), though I’m not sure if it’s still in print. I thought I had a copy tucked away somewhere but it must have been wishful thinking on my part. I think I’m right in saying that Iona and Peter Opie’s work on British nursery rhymes and childhood lore in general is the best source available.

Two sticks and an apple,
Ring the bells at Whitechapel

Maids in white aprons,
Ring the bells at St Catherine’s.

Oranges and lemons,
Ring the bells at St Clement’s.

When will you pay me?
Ring the bells at the Old Bailey.

When I am rich,
Ring the bells at Fleetditch

When will that be?
Ring the bells at Stepney.

When I am old,
Ring the great bell at Paul’s.

This is the version that I grew up with; the last bell was sung to represent a very deep, slow, imposing peal:

Oranges and lemons,
Say the bells of St. Clement’s.

You owe me five farthings,
Say the bells of St. Martin’s.

When will you pay me?
Say the bells of Old Bailey.

When I grow rich,
Say the bells of Shoreditch.

When will that be?
Say the bells of Stepney.

I do not know,
Says the great bell of Bow.

The Wikipedia article I’ve linked above suggests some meanings behind the rhyme and also quotes yet another version of it. We used to play the game illustrated in this nineteenth century plate, when you went round and round and got your head ‘chopped off’ if you were too slow. It’s strange how you play games as a child without ever really thinking about what the words or rituals mean. But let’s not get into too much blood thirsty stuff now, as I shall be off to bed shortly and don’t want to be dreaming of the dark doings in the Tower of London.

As anyone who follows me on Twitter will be aware, this week I unearthed Joseph O’Connor’s Ghost Light (Harvill Secker 2010) from my in-tray where it has been languishing for the last few months. It is the trade paperback edition, purchased in a charity shop and put aside in favour of other things. As I am sure I have remarked before, there is a particular pleasure in coming across a book that you have completely forgotten ever buying. Finding it all over again is a treat in itself. O’Connor’s novel was chosen as the Dublin One City One Book title for 2011 but I never actually got around to reading it. (See this article in The Blurb pages for more on the annual event).

The novel brings to life the secret love affair between playwright John Millington Synge (1871-1909) and Abbey Theatre actress Mary (Molly) Allgood (1885-1952) from their meeting in 1905 until Synge’s death. Molly went on to become a well-known stage and film star (as Maire O’Neill) though Synge’s family and friends brushed aside her real-life role as Synge’s lover and muse. Her relationship with Synge had never been considered suitable owing to differences in their respective religious and social positions.

I am just over half way through Ghost Light now and enjoying it very much after taking a few pages to get into it. At first, I thought the novel was going to be too sad and dreary for what I wanted at the time. Certainly, persistence has paid dividends and, while the book has its sadness, there is plenty of humour too with some brilliant comic dialogue. Of course, Molly is a wonderful heroine, both in her fiery spirited youth and her resilient old age in a battered post-war London.

The more I progress with the novel, the more I want to know about Molly’s life and times. I found a lovely portrait, painted by John B Yeats on my internet trawl for more information. Molly made many films during her career, working up until the end of her life. She went on to marry twice (her first husband died and she was divorced from the second) and had two children. Apparently all of her letters to Synge were destroyed but an edition of his letters to Molly was published in 1971 by Harvard University Press (edited by Ann Saddlemyer). I think this is one volume I would like to add to my Landing Bookshelves letters collection. Perhaps a Christmas present to myself?

For more information take a look at Joseph O’Connor’s webpages: http://josephoconnorauthor.com/ and also an article he wrote for Prospect Magazine (from where the picture of Molly was taken): http://www.prospectmagazine.co.uk/magazine/the-playboy-and-his-muse/ 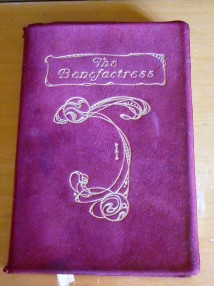