The Latke who couldn’t stop screaming: a Christmas Story by Lemony Snicket with illustrations by Lisa Brown (McSweeny’s Books, 2007)

This is a Christmas book with a difference as it tells the story of a frying Hanukah latke who escaped screaming from the pan. Here is

the blurb to give you a flavour (pun intended) of this seasonal tale told in Snicket’s inimitable style:

‘Latkes are potato pancakes served at Hanukah. Lemony Snicket is an alleged children’s author. For the first time in history, these two elements are combined in one book. People who are interested in either one or both of these things will find this book so enjoyable it will feel as if Hanukah is being celebrated for several years, rather than eight nights.’

The story opens as the potato pancake runs away screaming thus: “AAAHHHHHHHH!!!”
‘This may seem like unusual behaviour for a potato pancake, but this is a Christmas story, in which things tend to happen that would never occur in real life.’

On his flight through town (still screaming), the latke meets a row of coloured lights, a candy stick and a pine tree who all try to convince him that he is really as much a part of Christmas as Santa Claus:

‘“Santa Claus has nothing to do with it,” the latke said. “Christmas and Hanukah are completely different things.”
“But different things can often blend together,” said the pine tree. “Let me tell you a funny story about pagan rituals.”
But before the pine tree could begin its story, a family came tramping through the snow, searching the forest carefully.’

You may be able to guess how this story ends, all things considered… 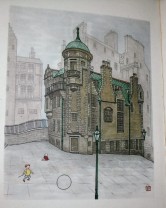 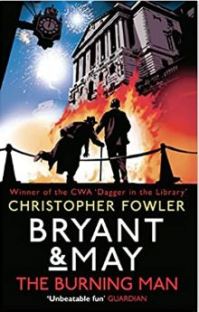