Now, you may have thought ‘Ah ha, this is going to be a poem about a cat’. And you would indeed be right but it is also a poem that continues the train theme that I began yesterday. There are many magnificent cats (I might mention Cat Morgan, I might mention Mr Mistoffelees) in T.S. Eliot’s poems but only one ‘Railway Cat’ and that is the incomparable ‘Skimbleshanks: The Railway Cat’ Here’s the first part of Eliot’s poem:

Old Possum’s Book of Practical Cats was first published by Faber in 1939 and re-published with additional poems in 1954.  Apparently T.S.Eliot first wrote the cat poems during the 1930s and included them in letters to his God children under the name ‘Old Possum’. Lucky kids! An illustrated edition of the Practical Cats (drawings by Nicholas Bentley) was first published in 1940 and re-titled in 1974 as ‘The Illustrated Old Possum’. More recently Axel Scheffler has illustrated Old Possum (2009) but I have a great fondness for Bentley’s cats in preference.

In this poem, there is again a great rhythm for reading aloud as the sense of the train journey up to Scotland is evoked. Mind you, I think T.S. Eliot was taking a few liberties with the night mail service, since I seem to recall from the GPO film that it carried no passengers. I believe there used to be a sleeper train travelling up and down but whether that carried mail or not, I doubt if it had as dedicated an employee as Skimbleshanks: The Railway Cat. 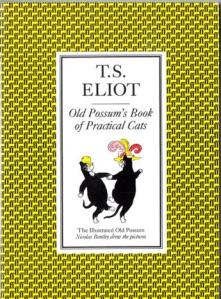 The first Old Possum cat that I recall was ‘Macavity: The Mystery Cat’ which I remember my mum reciting to us when we were young. I’ve had a couple of copies of Old Possum’s over the years and this present book  replaces one that mysteriously went astray during a house move (a case of the ‘hidden paw’ perhaps?).

I’m thinking of squeezing in one more train poem tomorrow on #PoetryinJune before moving onto a new topic so look out for that tomorrow. Meanwhile, any comments about your favourite poems on trains, cats or anything else would be very welcome!

Skimble and the stationmaster 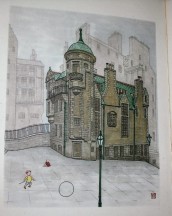 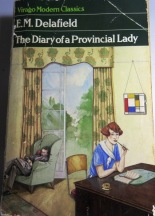 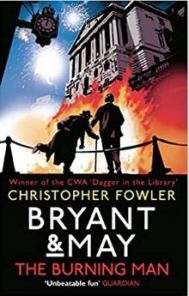