Alighting on Westwood as the next Landing read was the first result of my rummage and dusting session, and it is a mere whippersnapper at only a couple of years of residence. Vintage Books re-printed Westwood in 2011 and I bought it along with Conference at Cold Comfort Farm in I think, 2012. I’ve since read this sequel to Cold Comfort Farm (which I enjoyed, having been terribly afraid of being disappointed) but not got around to Westwood until now. Writing this post has reminded me that at some point I would like to get hold of Christmas at Cold Comfort Farm. 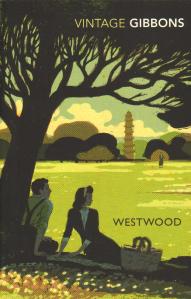 A picnic at Kew

When I first spotted the Stella Gibbons (1902 – 1989) re-prints I was probably as guilty as most people in thinking that she had written just one book. In her introduction to this edition of Westwood, Lynne Truss says, ‘This is what everyone knows about Stella Gibbons: she wrote only book, but it was a very, very good one’. Fortunately, I now know better; Gibbons went on to write in total, twenty-five novels, three volumes of short stories and four volumes of poetry. She started out as a journalist, working for amongst other papers, the Evening Standard, having studied her craft at University College, London. No mere flash in the pan then, you’d have to admit, though nothing ever attained the critical and public success of Cold Comfort.

Cold Comfort Farm, published in 1932 was Gibbons’ first novel but she began her literary career as a poet with a collection entitled The Mountain Beast in 1930. Westwood was published just after World War II, in 1946 and was set in a war ravaged London landscape. The book may be set in a city, and a damaged one at that, but Gibbons was able to find the same natural beauty in London, that she describes in Cold Comfort Farm and juxtapose it with the grim reality of blitzed houses,

‘The ruins of the small shapely houses in the older parts of the city were yellow, like the sunlit houses of Genoa; all shades of yellow; deep, and pale, or glowing with a strange transparency in the light…Pink willow-herb grew over the white uneven ground where houses had stood, and there were acres of ground covered with deserted, shattered houses whose windows were filled with torn black paper.’

One of the sequels

Set against the background of wartime privation, Westwood is a satirical comedy of relationships focussing on two very different friends, Margaret Steggles and Hilda Wilson. Margaret is plain, bookish, serious and not particularly attractive to men (as her mother had no compunction in telling her) whereas Hilda is lively, down to earth, very pretty and has any number of service boys. Margaret feels that she is never likely to meet a man who will want to marry her, while Hilda just wants to have fun without getting too involved with any of her ‘boys’.  Independently of each other, they both encounter the same man; a distinguished, rather pompous playwright called Gerard Challis (based on real life writer Charles Morgan) who lives a somewhat charmed life despite the war, in a lovely old house called Westwood in Hampstead.

Margaret is drawn into the Challis family circle because of finding a ration book on Hampstead Heath which proves to belong to Challis’ daughter Hebe Niland. When she belatedly remembers to return it, the spoilt Hebe, rushing off to a party leaves her two children in Margaret’s care until Grantey (Mrs Grant), the family’s old retainer comes to baby sit. Margaret adores Challis’ plays and is thrilled to have the chance to make the acquaintance of the writer and his family: his elegant wife Seraphina, the beautiful Hebe and artist son-law Alex Niland. Margaret also becomes friendly with Zita Mandelbaum, a refugee who helps around the house. Zita is passionately fond of music and the two young women go to concerts together, which opens up a new world of experience for Margaret.

In contrast, Hilda meets Gerard Challis as they both travel home on the tube one evening after blackout. Gerard has spotted Hilda, admires her hair and eyes, and sees in her an opportunity for a romantic dalliance. As he gallantly offers to see her home in the dark (her torch has broken), he gives his name only as Marcus since Hilda doesn’t realise his celebrity status. Gerard is convinced that since Hilda looks like a Daphne or a Thetis, she must have a poetic soul that he can nurture, but he is sadly mistaken as he gradually realises over several months of clandestine cultural outings. Hilda feels quite sorry for ‘Marcus’; she feels he is a lonely old thing, doesn’t take him terribly seriously and has no time for mythical references,

‘Hilda was beginning to feel annoyed. She was not used to this sort of talk, and for Thetis and enchanted paths, she could not have cared less. She said suddenly:
“Are you on the B.B.C?”
“Good heavens, no!” he replied, shuddering. “You odd child, why do you ask?”
“ You talk like one of the announcers; Robert Robinson, I think his name is. “And you sound like one, too,” she added darkly.
“No,” he said after a pause, “no, I have nothing to do with that institution for perverting the taste and moulding the opinions of the masses.

As you can see by his maligning of the output of Britain’s national broadcaster, Gerard Challis had a well-developed sense of his own cultural superiority. However, he also was fond of moulding the minds of those around him, particularly the women in his life. Clearly there were times when this didn’t work, such as during his courtship of Seraphina twenty years previously. Gerard Challis has spent so much of his life in writing about his ‘Ideal Woman’ that he is unable to appreciate the qualities of any flesh and blood ‘ordinary’ females. Is it possible that he doesn’t actually really like women, as his wife suspects, since he keeps on wanting to ‘improve’ them,

“You were such a pet, always wanting to improve my mind.”
“My desire seems to have remained unfulfilled,” said Mr Challis dryly.
“Well, you must remember me trying to read all those alarming books you unloaded on me…I did try…only somehow there was never any time for anything;…”

There is a wonderful cast of supporting characters including Hilda’s kind-hearted, jolly mother, two American servicemen (Lev and Earl) and Lady Challis (Gerard’s mother) who runs a virtual commune in a row of converted cottages. Westwood doesn’t have a conventional love story ‘Happy Ever After’ ending though there are romantic entanglements a-plenty (don’t worry, I’m not going to tell you what does happen).  Suffice to say that by the end of the novel Margaret has learned much about herself and is a much happier person than she was at the beginning. Gibbons leavens the sadness and poignancy of the book with her sharp humour and a very funny set-piece during a picnic at Kew Gardens.

And what of Hilda, Gerard, Zita, Lev and Earl et al? Well, I’ll leave you to find that out for yourselves. Meanwhile I’m off for another rummage on the shelves. Are there any more Stella Gibbons fans out there?

Picture credit: portrait of Stella Gibbons taken from Wikipedia, with thanks.