The Tiger in the Smoke by Margery Allingham (originally Chatto and Windus, 1952) is yet another of my Trinity Book Sale purchases (TBS Purchases). As you might have gathered, my TBS purchases forms its own TBR pile within the main TBR Pile (phew!). This edition of The Tiger in the Smoke is a 1953 hardback edition, which was part of a monthly series called World Books, published by The Reprint Society at 4/6 (for members only apparently). I note from the back cover that postage and packing cost 9d extra, (you could also buy Gone with the Wind at 8/- for the same postage price which was certainly a bargain). I love the cover design with the signs of the Zodiac on them, but the publisher doesn’t credit a cover artist which is a pity.

I haven’t read an Allingham crime novel for years so it was a nice indulgence to head back into the Golden Age of Crime. Margery Allingham (1904-1966) penned her first Albert Campion novel, The Crime at Black Dudley in 1929. He proved to be such a popular creation that he appeared in a total of eighteen novels and around twenty short stories. I was intrigued to discover that Allingham originally invented Albert Campion to be a spoof on Dorothy L Sayers’ character Lord Peter Wimsey. Over the course of time however, he became much more substantial than a mere jest and matured into a more complex character. Campion has an aristocratic background and his real name is as much a secret as were his missions during the war. Undoubtedly, my affection for Campion is influenced by the stylish BBC series from 1989/90 starring Peter Davison and Brian Glover. This comprised versions of eight of the novels, but not the first one, or indeed The Tiger in the Smoke. I can feel a DVD hunt at the local library coming on!

My last Landing TBR report was full of Elizabethan crimes, or at least political shenanigans and courtly dramas. This time, although we are still in the realms of dark doings, the century and location has shifted to post World War II London. The shady happenings take place in a particularly mysterious and gloomy setting here, as much of the book’s activity occurs in the midst of the worst pea souper in living memory. In fact, the atmosphere is quite Dickensian, there is a sense that Bill Sykes could swagger round a corner any minute. A motley crew of street musicians, threading its way around the alleyways, led by an albino called Tiddy Doll is suitably sinister.

The plot of The Tiger in the Smoke centres on an escaped criminal and former soldier, Jack Havoc who is trying to locate what he believes to be a treasure hoard, a secret he learned of during a wartime raid in France:

He was a man who must have been a pretty boy, yet his face could never have been pleasant to look at. Its ruin lay in something quite peculiar, not in an expression only but something integral to the very structure. The man looked like a design for tragedy. Grief and torture and the furies were all there naked, and the eye was repelled even while it was violently attracted. He looked exactly what he was, unsafe.

Havoc’s commanding officer Martin Elginbrodde, who had hidden the treasure, was later killed in action. Elginbrodde had left coded instructions for his widow Meg to retrieve it in such an eventuality. The story opens five years after a Elginbrodde’s death, when photographs supposedly depicting Meg’s late husband alive and well, have appeared in her post after the announcement of her engagement to Geoffrey Levett. Meg is Campion’s cousin hence, his being called in to assist in unravelling the mystery of whether her husband is still alive or someone wants her to think that he is.

In this case, Allingham’s deceptively affable amateur detective makes a late-career appearance in a supporting role, alongside his ever-reliable criminal turned sidekick Magersfontein Lugg. The hunt for Havoc is largely in the hands of the Scotland Yard, in the person of the charismatic and forceful Charlie Luke. I remember Campion novels as being quite light-hearted, but this one is much darker in atmosphere. Perhaps this is because I read previously, novels that were set much earlier in Campion’s sleuthing career. Here he is middle-aged, with a wife (Lady Amanda Fitton) and young son (Rupert) and he is very much aware of what he has to lose at the hands of the psychopathic Jack Havoc, on the loose in the obscuring fog. Campion’s son is blithely unaware of any danger, as his father decides to send him to safety with Lugg as a bodyguard:

Mr Campion looked down at him. He was shocked at the intensity of his own emotion, and more afraid of it than of anything he had ever known. One half of his life, more than half, four foot tall and as gaily confident as if the world were made of apple pie. 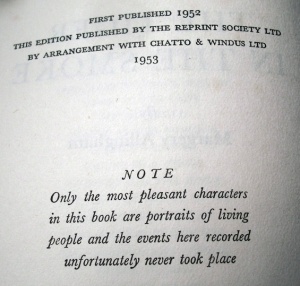 As I said above, Campion does not have a starring role in this one, but (without giving too much away) he assists in the capture of the Elginbrodde impersonator and his intuition gets Geoffrey Levett out of a potentially fatal situation. The twin pillars taking the weight of the story are the opposing moral forces of Jack Havoc and Meg’s father, Canon Avril. The Canon is a gentle, unworldly man whose faith in God causes him to confront the murderer, because he knows it is something he must do. I won’t tell you how it turns out, but Havoc’s life philosophy, The Science of Luck, which Avril calls The Pursuit of Death is challenged by the one person able to understand.

This is not so much a who-dunnit as a mystery novel that also explores a London still getting back on its feet after the war. The Tiger in the Smoke deals with damaged humanity, not only the prowling Jack Havoc, but also the band of misfits in Tiddy Doll’s gang. In the end, when the mystery is solved and the treasure is finally discovered by Meg Elginbrodde, it seems that peace will finally arrive.

Additional picture credit: Wikipedia (with thanks)

One comment on “Trinity Book Sale Buy: The Tiger in the Smoke” 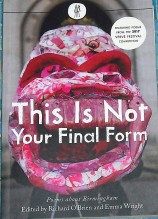 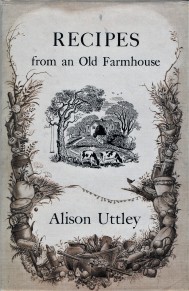