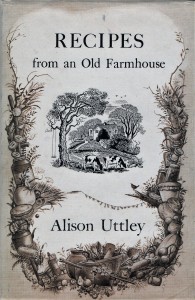 I wanted to follow up on the last Landing post on foraging-related books with another foody feature. This book is part memoir of a Derbyshire country childhood and part recipe book by children’s writer Alison Uttley (1884-1976), who was best known for her Little Grey Rabbit series and also the Sam Pig books. The recipe book was first published by Faber and Faber in 1966 and I recently treated myself to the copy shown here, which is in very nice condition. Something to cheer me up during the spring Lockdown! It is a beautiful little hard back book decorated with black and white sketches by Pauline Baynes. The drawings complement the text beautifully. Recipes has been reprinted more recently, but I opted for a copy of the original edition and wasn’t disappointed.

Alison Uttley gives us recipes that her mother used in the farmhouse kitchen, including recipes given by friends and neighbours. These were named for the donor, for example ‘Mrs Lowe’s Parkin’. The book is divided into sections with anecdotes, reminiscences and recipes. If you wanted to try out any of the items, you would need to scale down and adapt the recipes as Uttley gives the quantities and methods as they would have been used by her mother at the end of the nineteenth century in the farmhouse oven. So, you would need to figure out the oven settings and alter the timings accordingly. The recipes aren’t laid out as recipes as we would find them in a cookery book nowadays, but they are easy enough to follow. I’m planning to try one or two of the cakes or puddings in smaller quantities.

I have found overlaps with my foraging post as in a few of the recipes given, Alison Uttley talks about foraged ingredients gathered by the family. I was particularly taken with her account of the annual cowslip gathering expedition with her mother. They took a clothes basket out with them to fill with blossoms. She describes it beautifully here,

One morning in April my mother would announce that we would pick cowslips for cowslip wine. We would set off after breakfast, the servant girl, my brother, my mother and I, with a clothes-basket, and several smaller baskets. It was exciting to run down the first big field, deep down to the gate that led to the cowslip field. By the gate we left the clothes-basket, and we each took another basket and began to gather the flowers.

It sounds idyllic but it was also hard work for all of them, Uttley describing herself as ‘dazed with stooping to the ground’ after a few hours of picking. It sounds as though the children were allowed to go off and play though, while her mother and the maid carried on for the whole day. But of course, the work didn’t stop there. What Uttley refers to as ‘peeping’ was the next task: removing the flowers from the stalks and calyces. That task must have been mind-numbingly tedious as well as an instigator of repetitive strain syndrome. I find it bad enough picking stalks off fruit for a modest sized batch of jam, so I’m not sure how I would have coped with that mammoth preparation session.

I’d actually love to be able to try making a small batch of cowslip wine, but cowslips are quite rare now in Britain and also in Ireland according to Zoe Devlin’s website, wildflowersofireland.net. However, she does go on to point out that the plant has made a comeback in Ireland in recent years, so perhaps it will continue to spread.  In his foraging guide Food for Free, Richard Mabey suggests that the huge quantities of petals used in making ‘one of the very best country wines’ has probably contributed to the flower’s scarcity in Britain. He comments on the ‘devastation that some of these recipes must have wreaked on flower populations’. Thankfully now, you can buy cowslip seeds as well as other wildflower seeds to grow in your own garden and even up the balance a little. I somehow doubt that I will be able to grow enough flowers to make wine, though cowslip growing is to be one of my projects for next year (I have the seeds ready!) As far as beverages are concerned, I think I will have to stick to making elderflower cordial, the only problem there being that the best blooms always grow too high to reach!

I hope to return to the book for another Landing post, when I have had a go at some of the recipes. Meanwhile, I will decide where to go for August’s Landing Tales post when I have scoured the book shelves again!

Are there any Alison Uttley fans out there? Does anyone remember her Traveller in Time, televised by the BBC in 1978? I loved the series then, but wonder how it would stand up now.

(Pauline Baynes illustrations scanned from my copy of Recipes) 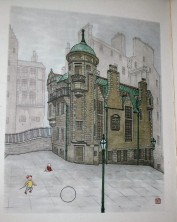 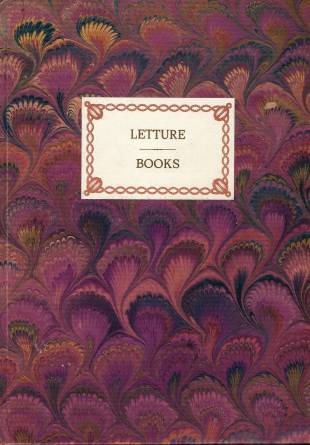 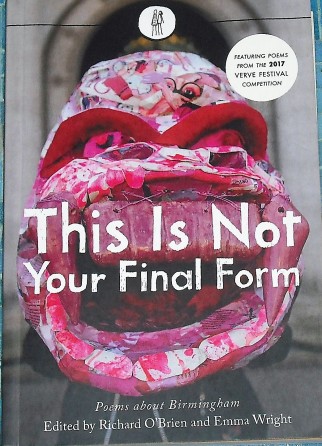