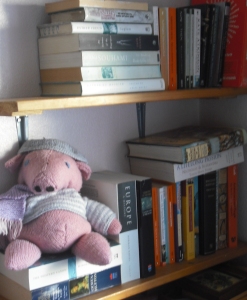 My latest Landing Tales read is technically a newcomer to The Landing, yet has long been on my TBR Pile. If that sounds like a riddle, blame The Bookworm and The Hobbit for the riddling influence. What I should explain is that That Great Lucifer: A Portrait of Sir Walter Ralegh (Margaret Irwin, Chatto & Windus, 1960) has been on one of my other TBR Piles for more years than I care to remember. My book on Walter Ralegh (1554-1618) is one of several that I have finally liberated from my parents’ house and lugged back over the water to The Landing. Sadly, I now have no idea where I bought it and I have left no clue on the inside pages. The only thing I can definitely say is that Ralegh is not one of my ex-library finds as there are no stamps or marks of any kind. The inside cover does not even have a dedication or name from a previous owner to jog my memory a little. It did however have a published price of 25s, which is amazing considering the price of hardbacks now. I am hoping that if I stop trying to remember, then the light may yet break through my literary fog. I do like to be able to ‘place’ the acquisition of a book, especially a second-hand one, as it adds a layer of personal memory.

However, to return to the story of the gallant Walter Ralegh (this spelling of his name was the one that he apparently used) and to Margaret Irwin’s telling of his life and career. In writing the book, Irwin allowed Ralegh to speak for himself as much as possible, quoting from his surviving prose and poetry. Irwin tells Ralegh’s story in two sections, dividing his career into the periods under the two monarchs under whom he served, Elizabeth I (1533-1603) and James I [IV of Scotland] (1566-1625). Woven in between Ralegh’s exploits are pen portraits of his contemporaries, some friends, some enemies (some, such as Robert Cecil were a little of both). Irwin gives scenes to the tempestuous young Earl of Essex (another of Elizabeth’s favourites) and to England’s sworn foe Phillip II of Spain. I was amused at her description of the formidable and devout Phillip as ‘A born Civil Servant, who believed in paper as devoutly as in God, he would have revelled in forms in triplicate’. I have a mental picture of him transported to the 21st century and firing off testy emails around the Spanish Empire. 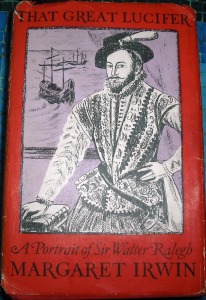 Irwin describes in her preface how John Buchan gave her a first folio edition of Ralegh’s History of the World (1614) and says that ‘from then on I had his World as my own to enter at will’. Irwin put her extensive reading to good effect, bringing this scholar, poet, adventurer, sailor and courtier to vivid life in her biography. She did point out that she was not intending to pen a comprehensive biography, but a portrait of Ralegh and his circle and their lives and times. In this, I think she has succeeded very well, personalities, scheming and politics leaping off the page. Not for the first time, I found myself wondering how anyone stayed alive and sane in the hotbed of Elizabeth’s court. Margaret Irwin obviously had a soft spot for Ralegh, though she does acknowledge his faults and blind spots. He seemed to be blithely (and unwisely) unaware of the potential danger to his safety amidst the conflicting loyalties of the court. Irwin quotes biographer John Aubrey (1626-1697), who says that ‘he was damnable proud’, which naturally enough did not endear him to his fellow courtiers especially since Queen Elizabeth listened to his advice. Writer and politician Sir Robert Naunton (1563-1635) said ‘she took him for a kind of Oracle, which nettled them all’.

I probably shouldn’t plot spoil (so to speak) for those of you who haven’t read anything about Walter Ralegh, but suffice to say that he did not hit it off as well with the Scottish king as he did with Elizabeth I, his ‘Lady whom time hath surprised’. Ralegh and the queen had their differences, most notably when he secretly married his own Elizabeth, Bess Throckmorton, but Sir Walter appears to have been a most steadfastly loyal subject and advisor. James I however, did not appreciate advice from Ralegh, once saying that he was ‘too saucy in censuring princes’. James also resented that his eldest son Prince Henry, Prince of Wales was a great admirer of Ralegh and his ideas. Ralegh spent many years in prison during James’ reign, but he used his time in extensive scholarly reading and writing. He wrote the intended first volume of his History of the World, dedicating it to Prince Henry, ‘that glorious prince’ after his sudden death. Not all of Ralegh’s writing has survived, as Margaret Irwin mentioned; she says that he wrote a study of Queen Elizabeth, a ‘Description of the River of the Amazons’ and a treatise on the West Indies.

After reading the Margaret Irwin book, I decided to scout around for an up to date biography of Sir Walter. On a trip to the library, I came up with Sir Walter Raleigh in Life and Legend by Mark Nicholls and Penry Williams (Continuum, 2011). It probably isn’t fair to compare the two books as Irwin didn’t intend to write a scholarly biography, so I don’t intend to try. Irwin’s book is tremendously readable and is certainly as factual as she could make it, but of course, the later book benefits from recent scholarship. Of course, the authors also take a more academic approach to their subject, using a wide range of contemporary sources. Having said all of that, Nicholls and Williams still manage to tell a rattling good story in their study of Ralegh. I was interested to note that despite using the spelling ‘Raleigh’ in the title to satisfy modern preferences, the authors use Ralegh’s own chosen spelling throughout the text. I am still only half-way through this book but enjoying it very much and I plan to follow up the references to Ralegh’s surviving work. The authors also mention a book that I read years ago, The Creature in the Map by Charles Nicholl about Ralegh’s voyages of discovery, which is an excellent read.

I’m not sure yet what will be next up on The Landing, so call back soon and take a look!

Additional picture credits: Wikipedia, with thanks, for ‘Raleigh’s Boyhood’.

My (our) latest stash

Well, when I say that, I really mean that I fleetingly considered not going to the Trinity Book Sale this year as I still have the inevitable pile of un-read books. However, as I managed to miss last year’s event due to its move away from an end of the week spot, I thought that I would make the effort and toddle along. The more I considered the matter, the less I wanted to risk missing any book bargains, especially as I am an aficionado of the half–price last day. Previously held on a Saturday, but now a Thursday, it is my ultimate book bargain pleasure.

This year, my final tally was seven volumes for a modest six euro; though two of the books were for The Bookworm, (I also blame her for drawing another couple of titles to my attention). As is usual at book sales, I felt that I could easily have gone along picking up books left, right and centre. I have done this at a library sale before now and virtually needed a fork lift truck to carry my purchases home. On this occasion, only a carrier bag was required to lift the spoils. 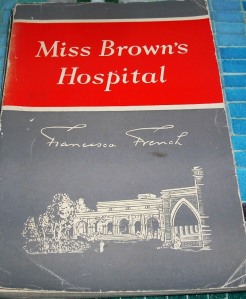 As you can see from the photos shown here, I brought home an interesting mix of fiction, biography and classic works. The Bookworm sneaked in an extra visit on the previous day, so here is our combined haul of reading matter for the next wee while. I was particularly struck by the little book, Miss Brown’s Hospital by Francesca French (1954). This is the story of Dame Edith Mary Brown who was the founder of Ludhiana Medical College in Eastern Punjab. I had not heard of her before, but Miss Brown apparently had ‘many claims to distinction: as scholar, doctor, educationalist and pioneer’. She was a graduate of Girton College, Cambridge, studied for a medical diploma in Scotland and obtained her MD in Brussels.

Edith Brown was also devoutly religious and ‘at the back of her mind was the unswerving determination that in applying her medical skill to the benefit of mankind she must combine it with the great emancipating power of the Gospel of Jesus Christ’. She decided to focus both her medical skills and her spirituality upon the women of India in the role of a medical mission. Her appointment in 1891 to the medical mission at Ludhiana gave her the opportunity she sought. This led to her establishing a medical training centre for Indian women. I hope to return to Miss, or rather Dr Brown in a future blog post when I have had a chance to read the book properly and perhaps also to delve a little more into the period and the location.

I was particularly pleased to discover the book on Sir Christopher Hatton (Eric St. John Brooks) as I have been having an extended Tudor-related reading period. This ties in quite nicely with a few other books that I have read over the past few months (some previously featured on this blog). Christopher Hatton was one of Elizabeth I’s favourites, a statesman and councillor who held the office of Lord Chancellor. As the lives of the courtiers in Elizabeth’s hotbed of political scheming were inextricably entwined, Hatton has popped up in my historical reading several times. This book, first published in 1946 was apparently an attempt to present a balanced view of Hatton’s life and achievements. The blurb claims that ‘Hatton’s part in the history of his times has been largely misunderstood’. It may be that later scholarship has superseded Brook’s study, so I will check to see if anything has been published on Hatton since then. Anyway, after enjoying an account of Sir Walter Raleigh’s life recently (Margaret Irwin), I shall look forward to reading it. No doubt I will meet up with Raleigh again as I read about Hatton, as I note that he merits several entries in the index.

Now, I am off to decide which of my Trinity Book Sale acquisitions to tackle first! 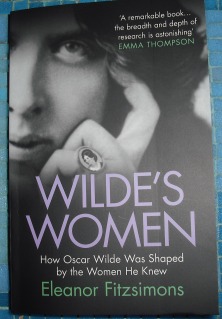 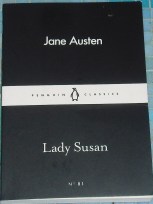 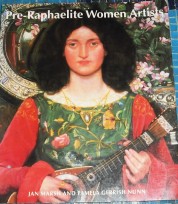