A Brace of Thrillers

Here as promised is Louise Phillips to add a touch of darkness to The Landing as she answers a couple of my questions about delving into loss and deeply buried emotions. I also couldn’t resist asking a question about Louise’s experience with her promotional video and if you click on the link below you can enjoy a chill down your spine.

I met Louise perhaps not surprisingly, through my job as a bookseller but I have dear old Twitter to thank for enabling us to keep in touch, thus paving the way for this opportunity to have Louise as a guest. Many thanks to the future ‘Grande Dame’ of crime for including me in her Blog Tour and for the thoughtful answers to my questions.

CM: In both of your novels you’ve dealt with the themes of lost children/childhood. Can I ask you what drew you to examine this kind of emotional and physical loss?

LP: I think the ‘who’ of ourselves is found in childhood. I had a challenging one, and it’s made me very aware of beginnings and how the past forms us. With Red Ribbons, I dealt with the loss of a child, and as a mother, this was particularly difficult for me to write. However, just because something is difficult, doesn’t mean you should back away from it. Being a mother certainly helped the writing, and many of the reviews focused on how the narrative dealt with the emotional bond between a mother and her child. I must have done something right, seeing as how it was shortlisted for Best Crime Novel of 2012 in the Irish Book Awards, and despite the difficult nature of the story, it was a story worth telling.

The Doll’s House is very different, and is a story which questions the notion that the past cannot harm you because it has already happened. In The Doll’s House, the main protagonist, Clodagh Hamilton delves deeply into the area of hypnosis and regression. The child and the adult Clodagh Hamilton get to meet via her fragmented recall of memory whilst under hypnotic regression – this was a fascinating concept to me as the writer, the idea that the child self and the adult self could meet. By and large, stories pick you, and it’s not surprising to me that I use a character’s childhood as the backdrop to the ‘who’ of themselves, and also, why they do the things they do. But a great question, and one I will reflect more on.

CM: Psychological thriller novels such as your own work can be very unsettling to read, leaving the reader somewhat less sure of his/her own world. How does the writing process affect you, as you are so involved in the material?

LP: In many ways, the fictional world is totally real to me when I’m writing it. It has to be, because if it doesn’t feel real to you, it won’t feel real to the reader either. Without wanting to sound over the top about it, I’m drawn to stories and emotions that force me to question and examine things. It nearly always starts with a question ‘why?’ and then ‘how?’, until I become utterly gripped. In some strange way, there are times when it feels like someone else is writing the novel. Despite being close to the material, I also have to separate myself from it. Readers want a great story that is well written, it’s not my opinion that counts, or what I feel about an individual character or what they’ve done. Maybe that protects me in a way, it certainly doesn’t frighten me. The only thing that frightens me about the writing, is first drafts – they are scary, but thankfully a long way from the finished story!

CM: Moving on to a different aspect of writing: You’ve been involved in producing a publicity video for The Doll’s House and I was just wondering whether you enjoy being a part of the promotional aspect of being a writer.

LP: It’s very different from the writing side of things, and I certainly can’t do any major promotional work while I’m writing. Do I enjoy it? Yes, in the main, but it can be hard work too. You have to put yourself out there, and that means taking risks. I was petrified the first time I was on radio, and then on television. When I did my first newspaper interview, it was the same. Now, I’d still be apprehensive, but I don’t let the apprehension stop me, and once I don’t make a mess of it, I’m happy enough. Things like making a book trailer or looking at other imaginative ways of promoting the novel are great fun. I write, so I love coming up with new ideas. The bottom line is that in today’s world it’s very difficult for a new author to get noticed, and the reason you look to be noticed, is that you want readers to read your book. If they do, hopefully, they will return for more. The recession has hit the book industry in a very dramatic way and readers when making their purchase will usually buy a novel by a writer they are familiar with and trust, namely the well-established names. As a new player in the field, it’s an uphill struggle, and anything you can do to encourage others to read your work, is a positive thing, even if it means asking your son-in-law to pretend to be a dead body in the canal!!

Born in Dublin, Louise Phillips returned to writing in 2006, after raising her family. That year, she was selected by Dermot Bolger as an emerging talent. Her work has been published as part of many anthologies, including County Lines from New Island, and various literary journals. In 2009, she won the Jonathan Swift Award for her short story Last Kiss, and in 2011 she was a winner in the Irish Writers’ Centre Lonely Voice platform. She has also been short-listed for the Molly Keane Memorial Award, Bridport UK, and long-listed twice for the RTE Guide/Penguin Short Story Competition. Her bestselling debut novel, Red Ribbons, was shortlisted for Best Irish Crime Novel of the Year (2012) in the Irish Book Awards. The Doll’s House is her second novel.

Both Red Ribbons and The Doll’s House can be ordered by clicking: http://www.louise-phillips.com/index.php/books/order  or just pop into your local Easons (3 for 2 offer on at the moment) or Dubray branch, or indeed (as the saying goes) any good bookshop.

Thanks again to Louise for taking the time to answer my questions. If you want to join in the conversation, drop a note in the box below.

Credits: promotional material and images supplied by the author with thanks. 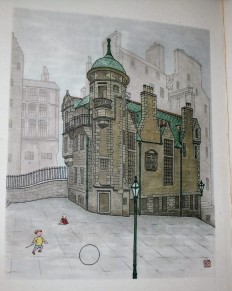 Author of The Story Collector, The Heirloom & The Mysterious Bakery On Rue De Paris

Jean a drawing a day

a drawing made each day in the year leading up to my 50th birthday and beyond...towards 4000!